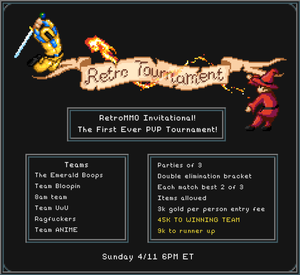 As the name suggest, Retro Invitational - The First Ever PVP Tournament! is the first ever held tournament. It was organized by thlurp, BigBluePin and Evan. Only parties of three were able to participate for the fee of 3,000g per person with all items and classes allowed. To win a match, two out of three rounds must be won. The structure of the tournament is typical round robin bracket. Winning team receives 45,000g and the runner up 9,000g. Participating teams were The Emerald Boops, Team Bloopin, 8am Team, Team UwU, Ragfuckers, and Team ANIME. The bracket and winning teams are available on Challonge.com.